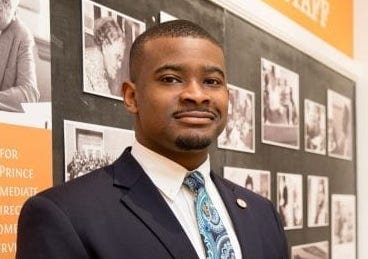 Cainan Townsend is the Director of Education & Outreach and Associate Director at the Robert Russa Moton Museum (Moton), a National Historic Landmark. Cainan is a graduate of Prince Edward County Public Schools in Farmville, Virginia. Cainan leads the Moton Museum Education Team as they work to advance the museum’s mission in all parts of the commonwealth through active education and public program offerings.

Cainan served as a 2016 Governor’s fellow with the Virginia Secretary of Education in the administration of Governor Terrance McAuliffe. In November 2017 he was elected to serve on the Prince Edward County School Board. In

Cainan is the great-grandson of John Townsend a plaintiff from Brown vs. Board of Education, and his father is a member of the lost generation missing several years of his education by the closing of the Prince Edward County Public Schools from 1959-1964.

A Prince Edward County native, Cainan graduated from Longwood University with a Bachelor of Science in Liberal Studies with a minor in Leadership Studies and with his Master of Science in Counselor Education.