The December 6 meeting occured amid growing national interest in how Virginia’s diverse cultural and environmental heritage is utilized to support learning and sustainable economic development.

Lawmakers and cultural agency leaders heard insights from participants of the summer 2021 Virginia Black Public History Institute that was co-hosted by the VAACR Task Force, Saving Slave Houses, and Virginia Humanities, and funded in part by a grant from the African American Cultural Heritage Action Fund of the National Trust for Historic Preservation with support from The Andrew W. Mellon Foundation. Three invited national experts also discussed their work around Black cultural rights, cultural landscapes, and environmental and cultural sustainability.

Preservation architect Jobie Hill served as the summer 2021 director of the Virginia Black Public History Institute, which supported descendant-led preservation of Black ancestral sites of slavery and resistance. Since 2011 Hill’s work has focused exclusively on the architecture of slavery, the impact domestic slavery buildings had on the lives of their inhabitants, and the preservation of the history of enslaved people. In 2012 she founded Saving Slave Houses to document and help preserve the nation’s remaining slave houses. Hill and Saving Slave Houses have partnered with the National Museum of African American History & Culture, Colonial Williamsburg, the National Trust for Historic Preservation, C-SPAN, Google, Virginia Humanities, Montpelier, and Monticello.

Tappahannock, Virginia native and University of Virginia Carter G. Woodson Institute alumnus Dr. J.T. Roane is an African and African American Studies scholar, professor, and a former National Endowment for the Humanities/Mellon Foundation Research Fellow at the Schomburg Center for Research in Black Culture at the New York Public Library. At Arizona State University’s Institute for Humanities Research, Roane leads the Black Ecologies Initiative, which supports the work of cultural workers, organizers and scholars engaged in understanding both the deep ecological knowledge and present-day vulnerabilities of Black communities in the U.S. and around the African Diaspora.

Dr. Andrea Roberts is a professor of Landscape Architecture & Urban Planning at Texas A&M University and a member of the Mellon Foundation’s National Monument Audit Advisory Board and the Texas State Board of Review. In 2014 she founded The Texas Freedom Colonies Project (TXFCP), an educational, social justice initiative, dedicated to the preservation of Black settlements’ landscapes, heritage, and grassroots practice through participatory research. In Virginia, endangered “freedom colonies” — historic Black settlements like Brown Grove in Hanover County, Pine Grove in Cumberland County, and Union Hill in Buckingham County, founded between 1865-1930 — continue to garner national attention. Roberts has worked with student researchers, community-based collaborators, and the freedom colony diaspora to create The TXFCP Atlas, the first statewide mapping effort to make ecological and development impacts on historic Black communities visible to the public, practitioners, and policymakers, and integrate freedom colonies and descendants into contemporary planning processes. Roberts has also consulted on the University of Virginia’s Charlottesville Cultural Landscape Atlas. 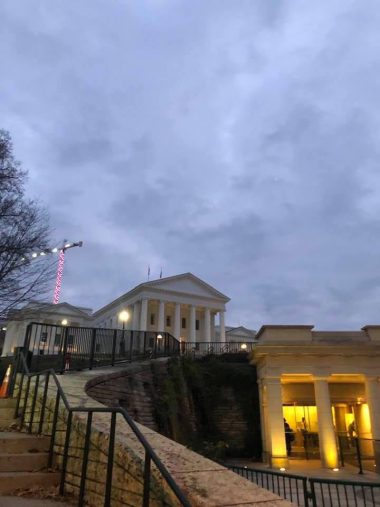 Too much faith in nature can be misleading and even harmful.

REPLAY: Parenting On the Spectrum

If you’re tired of thinking about your own health, maybe its time to turn to the kids.

To Be Seen and Belong:

There’s a fresh mural, finished just last October, on the north wall in Virginia Humanities’ new Dairy Market headquarters. The color palette features warm earth tones–browns, oranges, reds–an almost perfect contrast to the cool blues and creams in the surrounding decor. But for the subgroup of Virginia Humanities staff and board members that made up our Community Engagement Committee, the most important aspect of the mural wasn’t how it would make the space look, but how it would make the space feel.